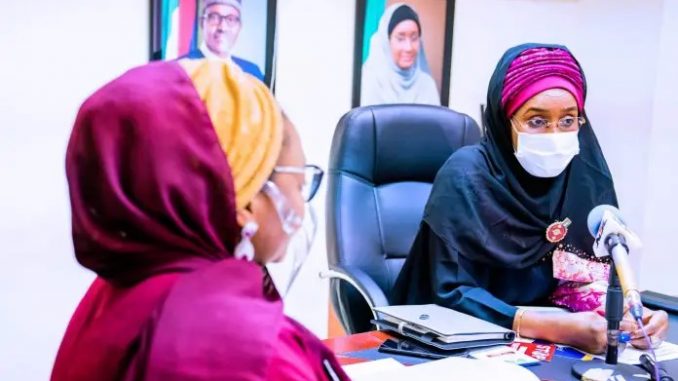 The Federal Government says it has targeted 1.4 million Nigerians under the Government Enterprises Empowerment Programme, GEEP 2.0, Phase II.
The Minister of Humanitarian Affairs, Disaster Management and Social Development, Sadiya Umar-Farouq said this at the inauguration of the programme on Thursday in Dutse.

The beneficiaries has been enrolled under the various components of the project such as Tradermoni; MarketMoni, vulnerable, under-privileged and marginalised women.

NAN also reports 6,000 beneficiaries registered under the programme in Jigawa would be provided with interest free loans ranging from N50,000 to N300,000 each depending on their businesses.

Represented by Dr Nasiru Gwarzo, Permanent Secretary in the Ministry, the minister said the gesture was in line with President Muhammadu Buhari’s administration drive to eradicate poverty in the country.

The minister who made a symbolic presentation of cheque to selected beneficiaries, said the programme was designed to uplift the living standard of the vulnerable, poor and low income earners to create opportunity for them in the national economic environment.

She noted that when Buhari administration took over in 2015, over 70 per cent of Nigerians were below the poverty line, adding that the president initiated viable programmes to uplift many people out of poverty.

The story is no longer the same in the country as many people are now living above poverty level after the introduction of various intervention programmes aimed at enhancing economic productivity in the country,” she said.

Also speaking, Technical Assistant to the Minister, Hajiya Zainab Musa said that Jigawa had the highest number of beneficiaries registered under the programme.

She said the programme had been digitalised to ease registration and loan disbursement processes, adding the beneficiaries were selected sequel to verification exercise using the Bank Verification Number (BVN), to ascertain their credit history and authenticate the genuineness of the applicants.

Musa also thanked the state government for its support to facilitate successful implementation of the programme.

Badaru, who was represented by the Head of Service, Alhaji Hussaini Kella, also thanked the Ministry of Humanitarian Affairs for accommodating Jigawa in the programme. (NAN)