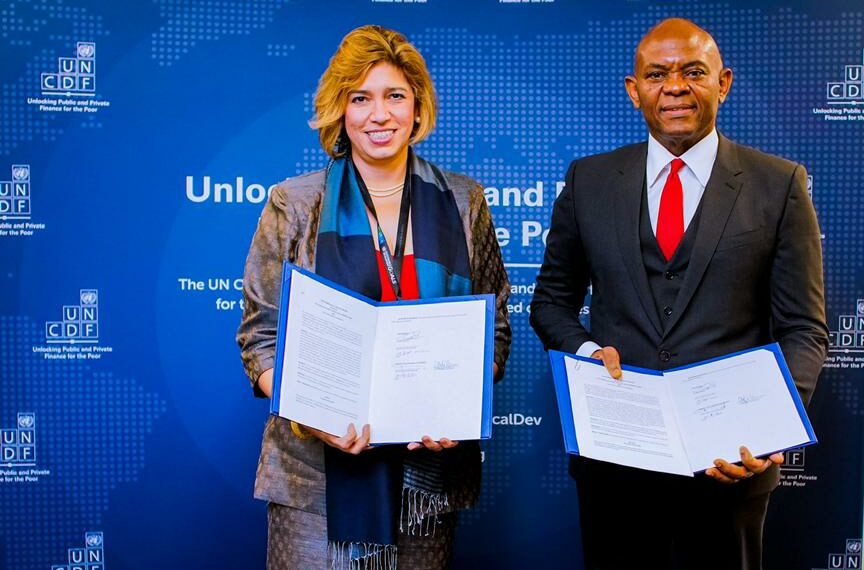 The Tony Elumelu Foundation and the UN Capital Development Fund (UNCDF) today signed an agreement to support youth entrepreneurship in Africa, with a specific focus on historically underinvested areas within African frontier markets.

In bringing together the expertise, experience and boots-on-the-ground presence in African markets of The Tony Elumelu Foundation and UNCDF, the two organisations will work towards reaching and empowering the most promising youth entrepreneurs on the continent.

A memorandum of understanding (MOU) was signed at the offices of UNCDF on the sidelines of the 77th session of the UN General Assembly. The agreement was signed by Tony Elumelu, founder of The Tony Elumelu Foundation, and Preeti Sinha, executive secretary of UNCDF.

“In Africa, we feel the harsh impact of youth joblessness. As African leaders, we must do something. As global leaders, it is important that we work together to address this issue. If we don’t deal with these challenges today, the world will not be a good place for all of us,” said Mr Elumelu. “In Nigeria alone, about 60 per cent of our young ones, who account for half of our population are not employed. This is a problem that we need to resolve collectively. I want to say thank you Preeti, your colleagues, and the entire UNCDF, for supporting this kind of partnership. We know what our young ones in Africa need, we know how having access to finance can help change the trajectory of their lives. I hope that what we are about to do today with this partnership signing will help to expand and scale what we do at TEF. Last year, we partnered with the European Union to empower 3,000 young African women entrepreneurs, because they share our belief that if you empower a woman, you empower an entire community. We hope that this initiative helps us to touch even more lives across the continent.”

“LDCs face a stark demographic challenge, as their population is projected to double to 1.7 billion by 2050. The LDC youth population aged 15 to 24 years is expected to soar to 300 million by 2050 when one in four youths worldwide will live in an LDC. We cannot embark on this journey alone, as the challenge is daunting and requires a concerted effort. This is why we welcome collaborating with like-minded organisations working in the same direction,” said Preeti Sinha, Executive Secretary of the UN Capital Development Fund. “The TEF is one like no other, a leading champion of young entrepreneurship in Africa. UNCDF is thrilled about the endless possibilities for collaboration in the field of youth entrepreneurship, leveraging the strengths of both organisations.”

The agreement is intended to leverage the distinct capabilities of the two organisations. The Tony Elumelu Foundation is the leading philanthropy empowering young African entrepreneurs, serving all 54 African countries. UNCDF serves as the UN’s catalytic finance entity for the world’s 46 least developed countries, which it sees as the frontier economies of today and the growth markets of tomorrow.

As part of the mission to support youth entrepreneurship in Africa, the MOU will call on the two organizations to mobilize resources for youth-led enterprises, including enterprises operating through joint programmes between The Tony Elumelu Foundation and UNCDF.

The two organisations under the MoU will also look to create platforms that will connect such enterprises with critical resources to support their business models; including financial capital, access to networks and markets and technical assistance.

The Tony Elumelu Foundation is the leading champion of entrepreneurship in Africa. Our objective is to empower women and men across our continent, catalysing economic growth, driving poverty eradication and ensuring job creation. We believe the private sector’s role is critical for Africa’s development and that the private sector must create both social and economic wealth. Founded by African investor and philanthropist, Tony O. Elumelu, and representing his personal commitment to creating a new generation of entrepreneurs, through his investment company, Heirs Holdings, the Foundation is active in all 54 African countries.

SSS urges ASUU to call off strike over security implications